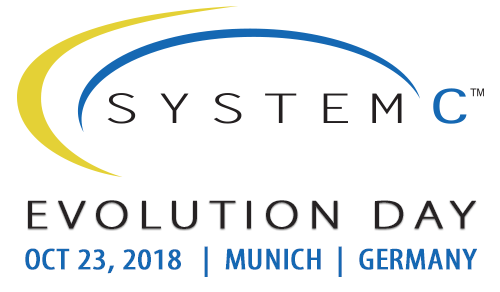 The third SystemC Evolution Day was a full-day, technical workshop on the evolution of SystemC standards to advance the SystemC eco-system. In several in-depth sessions, selected current and future standardization topics around SystemC were discussed in order to accelerate their progress for Accellera/IEEE standard’s inclusion.

SystemC Evolution Day is intended as a lean, user-centric, hands-on forum bringing together the experts from the SystemC user community and the Accellera Working Groups to advance the SystemC standards. This is the third event after a successful second edition in October 2017.

* Courtesy of Accellera, Cadence, Mentor A Siemens Business, and Synopsys

There are five in-depth technical sessions for directly discussing of new ideas and suggestions within the SystemC community. You are invited to contribute during these sessions.

The lightning talk will give an update of the SystemC AMS working group activities. The new features discussed for the next standard update will be presented. The goal is to gain feedback from the community.

In the second part proposals for the SystemC language standard from an AMS use case and SystemC AMS implementation perspective will be presented to initiate the discussion.

Where Are We on CCI?

This session provides an update on the CCI standard and an opportunity for feedback from the audience. The CCI Configuration standard was released in June of 2018 – what is the current uptake? We want to hear from the audience about their experience so far! We will also discuss the direction of CCI for 2019.

The Functional Coverage for SystemC (FC4SC) library provides mechanisms for functional coverage definition, collection and reporting that can be used in any application which is compliant with the C++ standard, starting with C++11. Because FC4SC is a header-only library and has no dependency on any third party library, it can be integrated with minimal effort into any application. In addition, the library provides an API that closely resembles functional coverage definition and usage defined by the IEEE 1800-2017 standard, facilitating the transition from SystemVerilog to FC4SC also allowing the possibility of developing tools for functional coverage conversion between the two. The library saves collected data in the UCIS format in order to be compatible with existing functional coverage tools provided by 3rd party vendors (e.g. Cadence, Mentor, Synopsys).

FC4SC use cases primarily involve (but are not limited to) measuring the level of exercise of SystemC models in order to track the features that are tested. This includes anything ranging from block level functional coverage, up to system level scenarios.

This section will discuss different TLM developments, e.g. the application of TLM for serial interfaces, as well as a generic payload enhancement proposal.

After the technical sessions, an open discussion session will be used to summarize the next steps for further progressing within the relevant Accellera SystemC Working Groups by the Accellera members on the session topics as well as additional opens brought up during the closing discussion. If you would like to become an Accellera member to participate in the working groups, information on how to join can be found here.

Special thanks to the SystemC Evolution Day event sponsors: